Before local Tulsa sign companies like Crown Neon Signs (as well as others all throughout the nation) became the trend for advertising signage, numerous American cities have been illuminated by neon signs dating as far back as the Roaring Twenties. Major cities come into full play when neon signs pop into mind—Las Vegas, New York, Atlantic City—but there’s one city that deserves to be in the conversation. 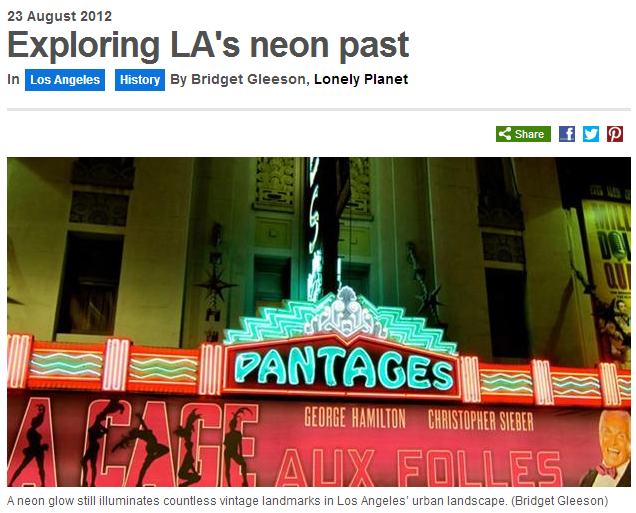 Writing about her experiences in BBC Travel, journalist Bridget Gleeson said that she’s grateful that “an electric glow still illuminates countless vintage landmarks in Los Angeles’ urban landscape—from decorative antique theaters and old-fashioned apartment buildings to traditional mom-and-pop delicatessens and gloriously seedy cocktail bars;” much of which she attributes to a group of individuals aiming to preserve the city’s bright neon history.

Los Angeles has been at the forefront of every neon historian’s point of view as L.A. is recognized as one of the first U.S. cities to put up neon signs. An automobile businessman by the name of Earle C. Anthony is known to be the pioneer in the use of neon signs in America, when his car dealer store “Packard” had the neon sign brightly illuminating the corner of 7th and Flower streets back in 1923. In fact, so popular was Anthony’s sign that people drove long distances just to see it, even causing massive traffic congestion along the area.

One of the people determined to bring Los Angeles’ colorful past into the spotlight is anthropologist Eric Lynxwiler, who conducts a tour of L.A.’s classic neon splendor (sponsored by the city’s Museum of Neon Art). The tour runs through downtown, Chinatown, and Hollywood, and is a fairly popular tourist activity. The tour stops by several vintage neon signs around the city. A couple of these tour stops include:

Situated atop an old giftware and art supplies store, the sign shows the likeness of a Buddha slapping his thighs and has been a fixture on the site since the store opened in 1938. Lynxwiler notes that the sign always made him smile whenever the tour bus would drive past it.

One of the most popular watering holes in Hollywood, The Frolic Room is absolutely recognizable with its catchy neon sign. Described by LA Weekly as colorful as confetti and picturesque enough to lure anyone in, the bar’s sign was propped up way back in the thirties.

L.A.’s colorful signs are portals into America’s past, way before numerous Tulsa sign makers went into business. And with determined people working to preserve them much longer, they’re not likely to go down anytime soon.