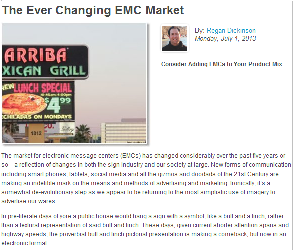 Electronic message centers (EMCs) are quickly growing into the next trend of signs, reports Regan Dickinson for Sign & Digital Graphics Magazine. With a fast-paced society having little time to read signs, marketing messages today must be simple and straight to the point. As many businesses realized, pictures definitely speak louder than words, which is why they’re quick to pick up the trend. In this case, what is considered modern signage is actually a return to its primitive roots.

Despite its sophisticated medium of bringing the message, the function of EMCs fundamentally goes back to symbolism, which was the dominant format of signage in the past. Businesses used to place symbols relevant to their goods, services, or promotions; for example, a bunch of oranges to represent a $1.99-a-kilo promo on oranges. Symbolic advertising waned for a while as more informative advertising emerged, filling ads with loads of text. Today, many Tulsa signs prefer symbolic advertising again.

The rapid growth of EMCs is attributed to several factors, including the decreasing cost of manufacture. LED technology itself is still far from being low-cost but the total overhead of making EMCs has been declining with each new technology or production method, helping more businesses gain access to them. On a related note, with proper advertising, the hefty investment in EMCs will be offset by a spike in revenue.

The signs also excel in visibility, especially for oncoming traffic. Drive-by advertising, Dickinson says, is currently the most popular form of advertising application for EMCs, attracting motorists or pedestrians within its effective range. While these signs can also be used indoors, outdoor LED signs in Tulsa, OK can cover a wider range and deliver the message to more potential customers. For EMCs to be effective, however, they need to be properly positioned.

Businesses have learned their lessons and are adapting to the Internet culture by cutting down on texts and flashing more images or graphics onscreen. For example, instead of displaying, “Get 50 percent off choice cuts right now,” signs would say, “$3.99/lb bacon” to squeeze in all of the message in those few seconds—the duration it would take for a vehicle to drive by and for the sign to be read. Establishments can express the full content of their offers even with as few words as possible.

The return of symbolic advertising and the surge in demand for EMCs are, in a way, a relatively odd pair. Nevertheless, their effectiveness in advertising has made commercial signage providers like Crown Neon Signs busy beating deadlines. Soon enough, people may see a LED panel every few hundred yards.